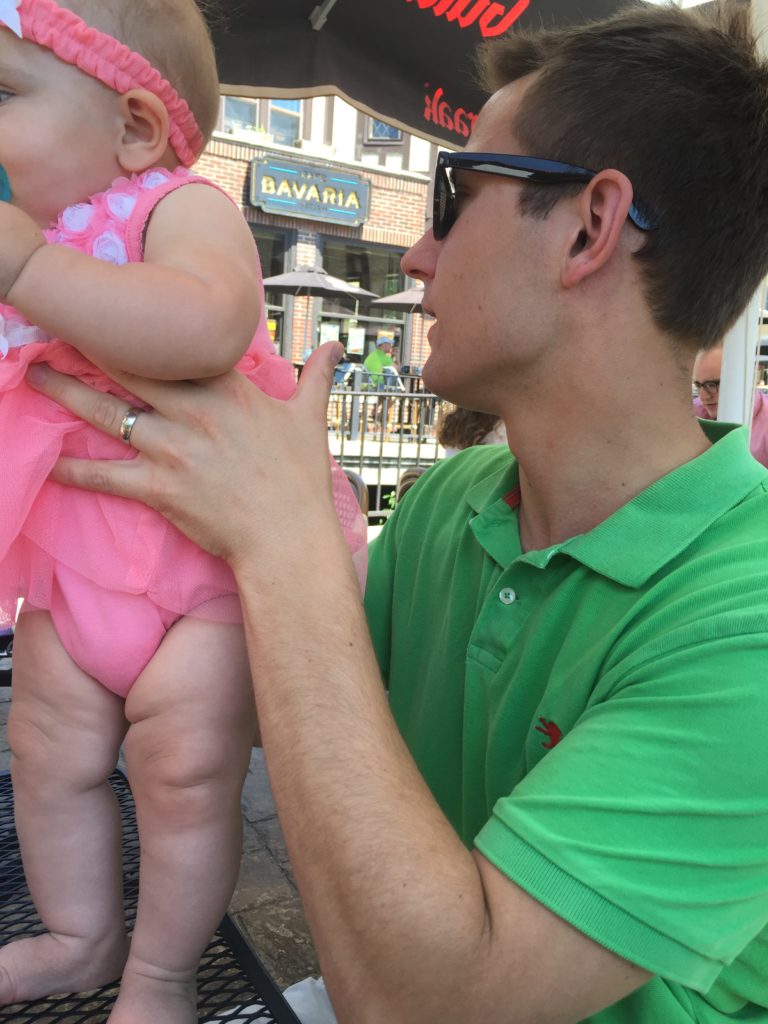 APPRECIATING HOW MY HUSBAND PARENTS

When Anouk was a newborn, I was running on fumes. Literally. I wasn’t able to drink coffee for the first time since I was about 15 years old, and when Jay would brew a cup, I would linger over the steam. I was truly tired for the first time in my life. Not stayed-up-at-a-sleepover-tired, but I-can-feel-every-beat-of-my-heart/what-was-I-doing-again?-tired. And this is nothing special. It is what motherhood is.

When I was pregnant, people would ask me how I was sleeping. They told me to sleep as much as I could before the baby arrived and I just didn’t let that sink in. I wasn’t going to be able to sleep after the baby arrived? I thought that’s what babies do… sleep…

I also learned what fatherhood is… or isn’t. I was constantly getting annoyed that when she cried, Jay wasn’t helping her. He would tell me “If I could feed her I would, but I can’t. What do you want me to do?” Every time she was fussy he thought “She’s hungry.” He didn’t have to wake up at night because I would. He didn’t have time to help during the day because he would be on trips for work, or when he was home, he would need to be rested to fly passengers around. I was being stretched too thin, I thought.

There was also this anxiety. I don’t normally feel it, but when Anouk came, I had it bad. It would come on at sundown. She had that night crying, purple crying , the screaming colic thing that I didn’t know could drive me up a wall. Because the sun went down at around 5 in winter, she would cry for 3 or 4 hours, and 5 or 6 nights a week. I was coming undone. I could catch a sign that it was about to start, and I would get rattled. And Jay would, too. And both of us would quake in our own ways hoping to survive the night, which we always did… but I felt like I was taking the brunt of it.

What I could not manage in that hard time was how to learn the motherhood thing WHILE learning what fatherhood seemed like for Jay. I was scared that he was going to get used to me doing everything and so I felt that I needed to make him step it up. I needed his help and I wanted it to feel natural. So there was some friction.

I looked online. “I can’t get my husband more involved in caring for our 6-month-old son, and I want his help. What can we do?” Apparently I wasn’t treading on new territory… “My husband isn’t even trying to bond.” Tell me about it… I was turning into a reactive, critical person AND running on fumes.

So here’s the thing I learned… Jay was freaked out too… but freaked out in a different way. He is so smart. He is so good at everything he does… I think he was afraid of not being great at this one thing, his first daughter. He saw me in the beginning as though I had it all together and thought it all came naturally (little did he know that I had read 100+ hours on how high should a fever be to call 911? or What are the different crying noises babies make? ) His reality was that he didn’t know what to do and he didn’t want to be criticized for trying something under my watchful eye… poor guy.

So here we have the backseat dad and the sleepless mother. Lose-lose. Both of us were feeling hurt, neither was enjoying the family we had been dreaming of making, and Anouk was all purple half the time crying. Ick.

Since those first months, a few things have become clear. Our little Anouk probably had acid reflux preventing her from relaxing while eating and napping. (Our pediatrician told us to look out for certain markers but they weren’t showing up. She didn’t spit up, she didn’t arch her back while feeding.. little did we know that there was a link between reflux and torticollis, knowledge that would have helped us as first time parents) Jay learned that I could not sustain Anouk’s full-time along with working full-time, keeping the house, making our meals, seeing family and friends and all of the other things I had to do for our family.He needed to help me in a bigger way. He had to learn to care for her his own way. And I needed to learn about how he cared for her. Dads provide a unique way of care giving that’s different from moms’, and babies thrive on both. My criticism wasn’t helping him experiment, and I has limiting the way that he could help me! For him,staying on the sidelines was more comfortable, but it was preventing him from learning how to comfort, care for, and develop a relationship with our baby.

As soon as I gave my husband time and room to learn how to be a caregiver, everything changed for us. I had to start letting myself off the hook with her. If he was in charge, I wouldn’t rush over as soon as I heard my baby cry. I would trust him to work it out himself.

Since then, Jay has become a remarkable dad, and human being. He learned that taking her for walks in a baby carrier in those hard hours put her to sleep. He learned how to carry her in just the right way to calm her down after crying. I see him differently, too. I see him as someone who can feel fragile and timid. Jay is someone who doesn’t want to let me down. He’s really exactly the person I hoped he would be when we fell in love. It just took at little while for ME to figure that out.