Coffee is something that is not only the second most consumed beverage on the planet behind water but for many people is really the fuel that gets them through their day (or at least until mid morning!). But, how coffee is brewed is not something many people put thought into. They buy makers because their last one died, they see one at the store on sale and it will do the trick, or a friend has one that seems like the next best thing. 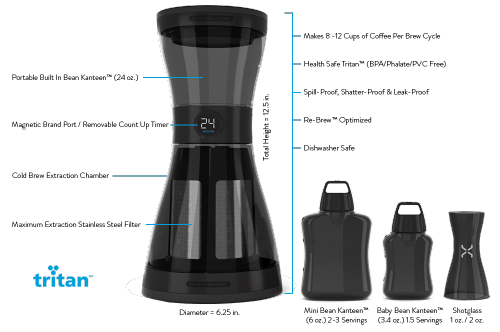 But how a coffee maker brews impacts how healthy, or not, the coffee is.

Here’s some scary stuff: French press and espresso have high levels of an oily compound called a Diterpine (Cafestol and Kaweol specifically). Basically it’s that oil slick that floats on the top of your coffee and well, it’s not good for you! Drip and single serve are really no better since the high heat used to quickly brew with them makes coffee that’s really high in acid. Also not good, especially if you have a sensitive stomach or give a darn about your teeth. The acids can cause trouble for tummies and contribute to staining and acid wear on teeth. Austin Powers anyone?

Drinking cold brew coffee is definitely a better to go because it doesn’t use heat or pressing to brew so it has lower levels of the oily stuff and acids. Cold brewing involves soaking or stepping coffee grounds in cold water for at least 12 hours. What you have after that is a coffee extract that is then diluted with hot or cold water whenever you get a hankering for a hot or iced coffee drink.

Cold brew can also be purchased in the store, pre-bottled, if you don’t mind paying 300% more than if you did it yourself at home and you don’t care about having fresh coffee. Which gets me to my next point, DIY cold brewing. You can do it in a mason jar and there are several makers on the market but they look a lot like a bucket and cork or some type of chemistry set. Either way the DIY method is super-messy, inconvenient and not something I’d probably want to do more than once or twice a year.

The great news is there is a new cold brew coffee system coming out soon that looks a…. It’s called the BOD and it seems really easy to use. It’s modular so you can brew with it or tote it anywhere. It also comes with accessories they call Bean Kanteens in various sizes so you can take cold brew coffee with you in your purse, pocket, or hang it on your key ring. The company also has some pretty impressive stats on how much lower in those yucky oils and acids coffee brewed using their method contains. They are doing a cool sweepstakes to win one and if you’re looking for a healthier way to enjoy coffee, give it a shot! What have you got to lose?

Go to: BodyBrew.com to ! Giveaway Ended.

How and Why Visual Content Improves User Engagement in Blogs 20225