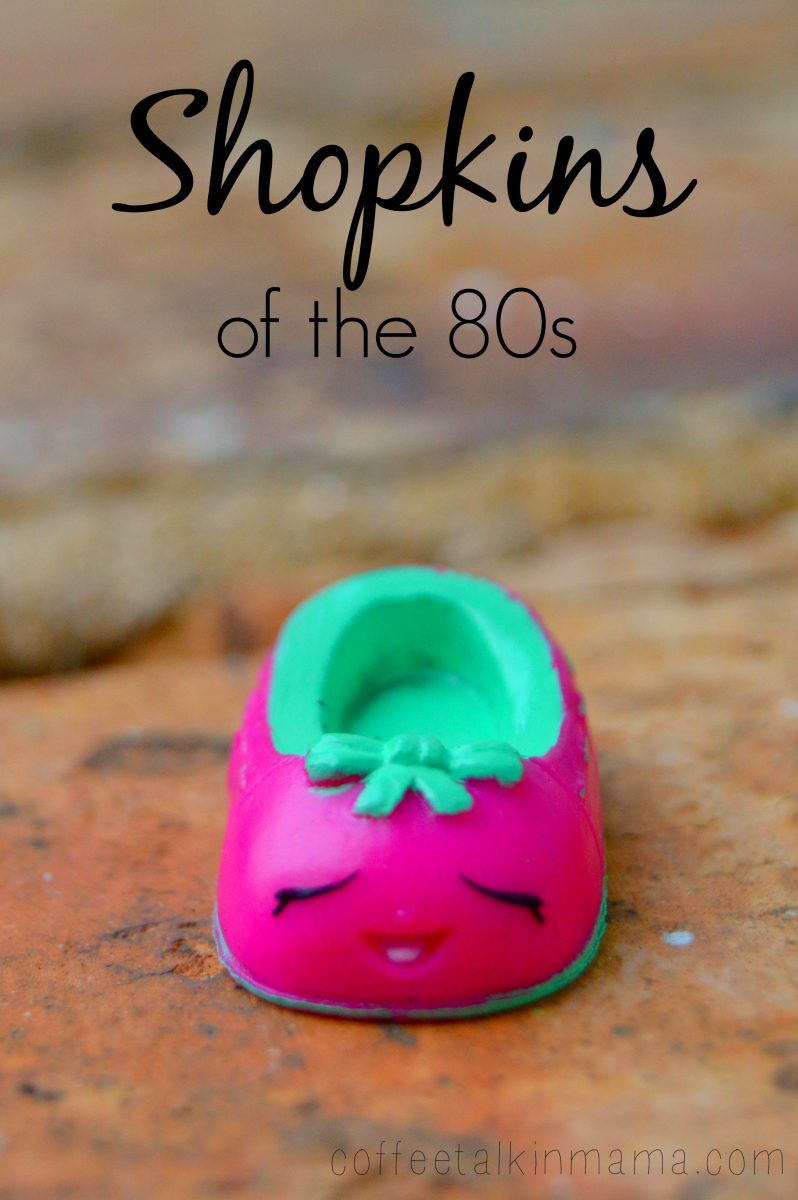 Every waking minute of this week I have heard about this thing called Shopkins.  Up until a few weeks ago I was blissfully ignorant of what these weird little plastic creatures are.    If you too are like me and apparently hopelessly clueless or live in a cave then let me fill you in.  As one friend described them, “they are the embodiment of consumerism in a tiny plastic toy.” Basically they are all different common objects like shoes or scissors and many have names that use alliteration in an annoyingly cutesy way.  i.e. Molly Moccasin. The second grade has suddenly become obsessed with these things and are apparently smuggling them into school like a pint-sized cartel.  Then they bargain and negotiate trades at recess.  We haven’t actually bought any of these things yet and my daughter’s birthday is right around the corner so I figure it is just a matter of time before they make their way into our lives via the Grandmas.  I cringe when I see them because they just look so….stupid.

As she was going on and on and on about these little characters I thought about how things have changed and how when we were kids we had better stuff to do than collect little, smiling laundry detergents.  Or did we? Think about it.  The 1980s was the height of weird toys.  Do you remember these gems of marketing genius:

1: Garbage Pail Kids:  These things were the number one nightmare of all teachers everywhere.  We collected them all and argued over whose was the nastiest of the bunch.  We ‘ewwed’ over the poor little cardboard creatures and we even had baseball card binders to house our gnarly collection.

2: Caboodles:  I was obsessed with having a Caboodle.  Obsessed.  I think I pestered my mom and Santa Claus for months before Christmas in order to have my coveted lavender colored tackle box.   My grandpa laughed at me and told me if I wanted one then to go into his shed and find the cleanest fishing lure box he had.  They all had worm guts in them.  No thank you very much, Pawpaw.  Something so primitive and un-pastel couldn’t possible hold my Electric Youth, Love’s Baby Soft, or Kissing Koolers.  Aahhh…the Eighties will forever smell like Dr Pepper flavored lip balm and Debbie Gibson.

3: Wuzzles:  They were a cartoon.  They were multi-colored.  They were nonsensical.  Their little faces were slapped on everything under the sun and they were fabulously ridiculous.  We couldn’t get enough of them.  Excuse me, I need to put on my jammies, make a bowl of Count Chocula and watch some old reruns on YouTube.

5: Popples:  Are they a ball?  Are they a stuffed animal.  Are they a marsupial on LSD?  Who the hell knows or cares. They were awesome with their little pompom tails and crazy colors and accompanied us to every slumber party in elementary school.

6: Sweet Secrets:  I had one of these and I LOVED it.  You had a little doll one way or you could open up the little compartment and could fold in the head, arms, and feet inside to make a jeweled key chain.  They had absolutely no purpose what so ever but it entertained me for way longer than it should have which meant my parents probably saw it as money very well spent.

7: Kool-Cuts Kara: She was like a low-budget Barbie with hair plugs.  She became mine on Christmas one year and I was so excited.  I was one of those kids whose mom wouldn’t let me cut my Barbie’s hair so when I unwrapped my sweet new Kara doll I couldn’t wait to test my Vidal Sassoon skills.  I was an artist and finally I had my canvas.  The toy lasted approximately 4 minutes until I screwed up her sassy pageboy style and my mom refused to go out on Christmas day to wait at the Roses until they opened so she could buy me replacement hair plugs.  Spoilsport.

8: Slap Bracelets: Who didn’t love slap bracelets.  They were cheap, colorful, and you could trade them with your friends.  They also made that really satisfying and sometimes painful snap around your wrist when you flogged your arm until it turned red and blotchy.  Teachers hated these too.  They were distracting and cause more than one argument during class.  There was also that rash of urban legends where kids lost blood, arms, and heads from these little fashion accessories.

9: Micro Machines:  Who didn’t love playing with Micro Machines?  They were like Hot Wheels but better because they had the fast talking guy in the commercial.  Eeek! It seems silly now but to bored first graders on the bus it was a fierce competition to see who could imitate him the best.    These little cars went everywhere, in sponge car washes, up elevators,  and carried around town by cranes.  If you got bored, you could leave them on the floor for your parents to find with their bare feet.  Nintendo took Micro Machines to a whole new level when then made their video game.  I finally got to live my dream of driving around on a pool table or a school desk.

10: And last but Certainly not least – Bell Charms:  Probably the closest thing the 1980s had to Shopkins and man oh man did I love them.  You could connect them to plastic chains and make necklaces or bracelet.  If you had enough of them you could strut around school like a boss.  Like Mr. freakin T.

Okay so maybe my second grader and all of her little friends are onto something.  All of these things were truly dreadful but so very wonderful.  I can guarantee our parents cringed when we asked for these things for our birthday.  Hopefully one day, like me, she will nostalgically look back on these silly little things as a happy part of her childhood.