There are very few delights quite like experiencing something with another person. If you’ve ever been to the cinema with a group of friends or played a sport with a worthy opponent you know, then you’ll be aware of this. A good, thoughtful discussion with someone after a movie deeply enriches the experience, while a respected rival spurs you on to become better at your discipline, both of you encouraging the other through healthy competition.

Nowhere is this more true than in video games. The first ever video game, Tennis for Two, was invented as a multiplayer experience; crowds would flock to the oscilloscope-based amusement, queueing for a chance to take on their friends using the now-quaint analogue control mechanisms. Shortly thereafter, Pong established itself as a staple in arcades everywhere, and each decade since has seen a defining multiplayer game take root in the home. 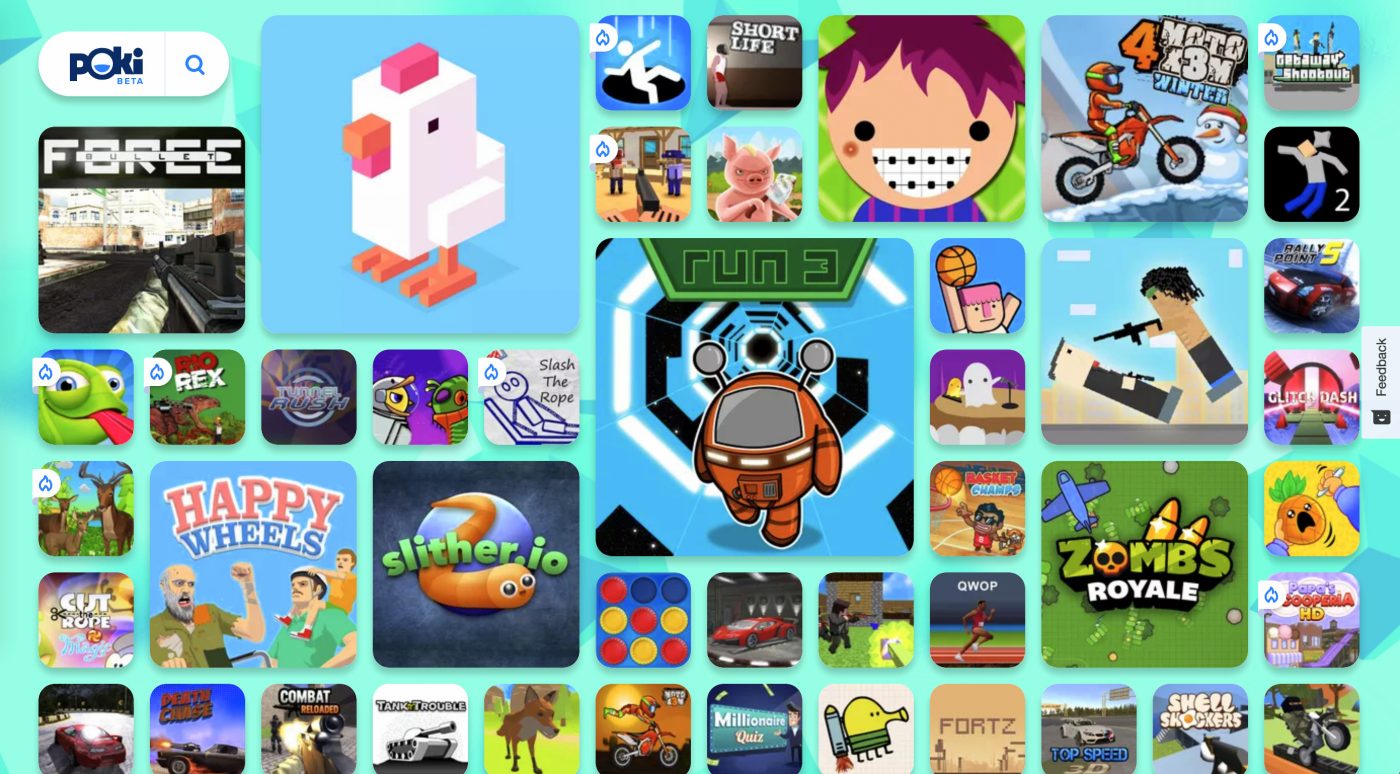 Thanks to technological advances, though, it’s now easier than ever to play multiplayer games with your kids on such platforms as Poki right from the comfort of your Internet browser. We’ve gathered 10 of the best games to play with your little ones below, all of which don’t require any special hardware to play – just a laptop, two players and an open mind.

This one might be best for those of you with slightly older kids, as it’s a tad violent. That being said, if you’re happy to give it a try, the violence isn’t particularly shocking or gruesome thanks to Getaway Shootout’s focus on good old-fashioned hilarity and multiplayer fun. The elevator pitch is thus: you and a second player take on the role of criminals escaping a successful (or unsuccessful depending on your interpretation) heist. You must reach the escape vehicle, or “get to the choppa”, before your compatriots do. In order to help you do this, an array of powerups have been provided, each of which changes the battlefield in different and unique ways. 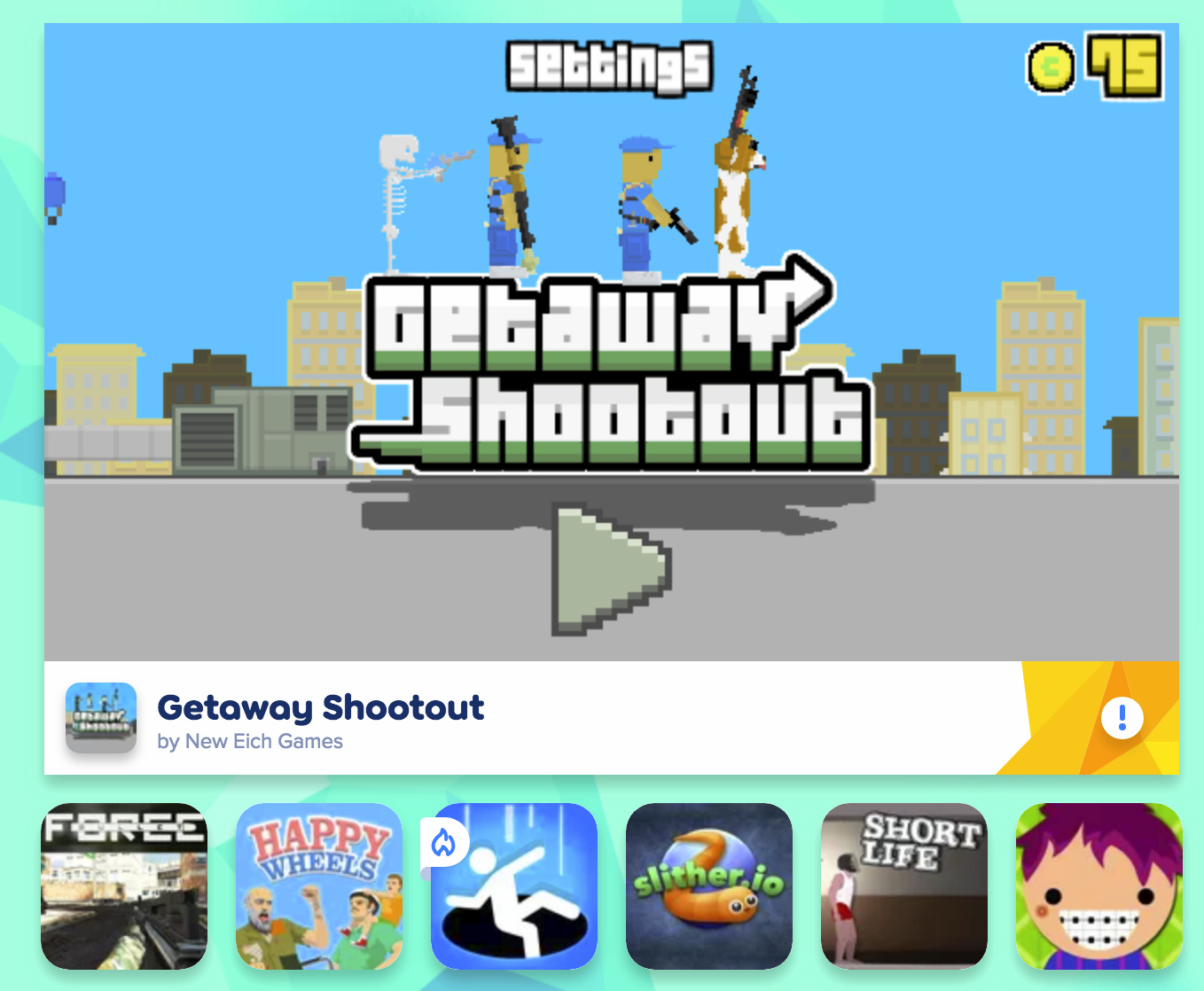 Getaway Shootout’s main draw is its simultaneously simple and complex control system; each player has only three keys, one of which is reserved for powerups. The other two make your character jump either left or right, with the pressure put on the key determining the length and power of the jump. This game on Poki is a great laugh, and it’s best experienced with a second player, as you’ll have many stories to tell once it’s over.

Never has a game’s premise been more aptly explained by its title. In Get On Top, you and a second player compete to…well…get on top of each other. It’s essentially a wrestling game which has been stripped back to the genre’s barest essentials; a pin means victory, and a pin can literally be achieved simply by toppling your opponent over and being on top of them for a certain amount of time.

Much like Getaway Shootout, the appeal of Get On Top lies chiefly in its control scheme. Using the keyboard, you can shift your weight in various directions, as well as jumping, and those are the only tools available to you. There’s no weaponry, no powerups and no cheating; all you can do is quite literally get on top. Expect to have tears of laughter running down your cheeks by the end of this one.

Coming to us from the same dev team as Getaway Shootout, Rooftop Snipers has a very similar aesthetic and control scheme to that game, but the focus is much tighter and less sprawling. In Rooftop Snipers, your aim is simply to shoot your enemy off the roof using the titular sniper rifle. An array of famous characters is assembled here for you to choose from, so if you’ve ever wanted to see Batman shoot John Wayne off a rooftop with a sniper rifle, you can do so here. 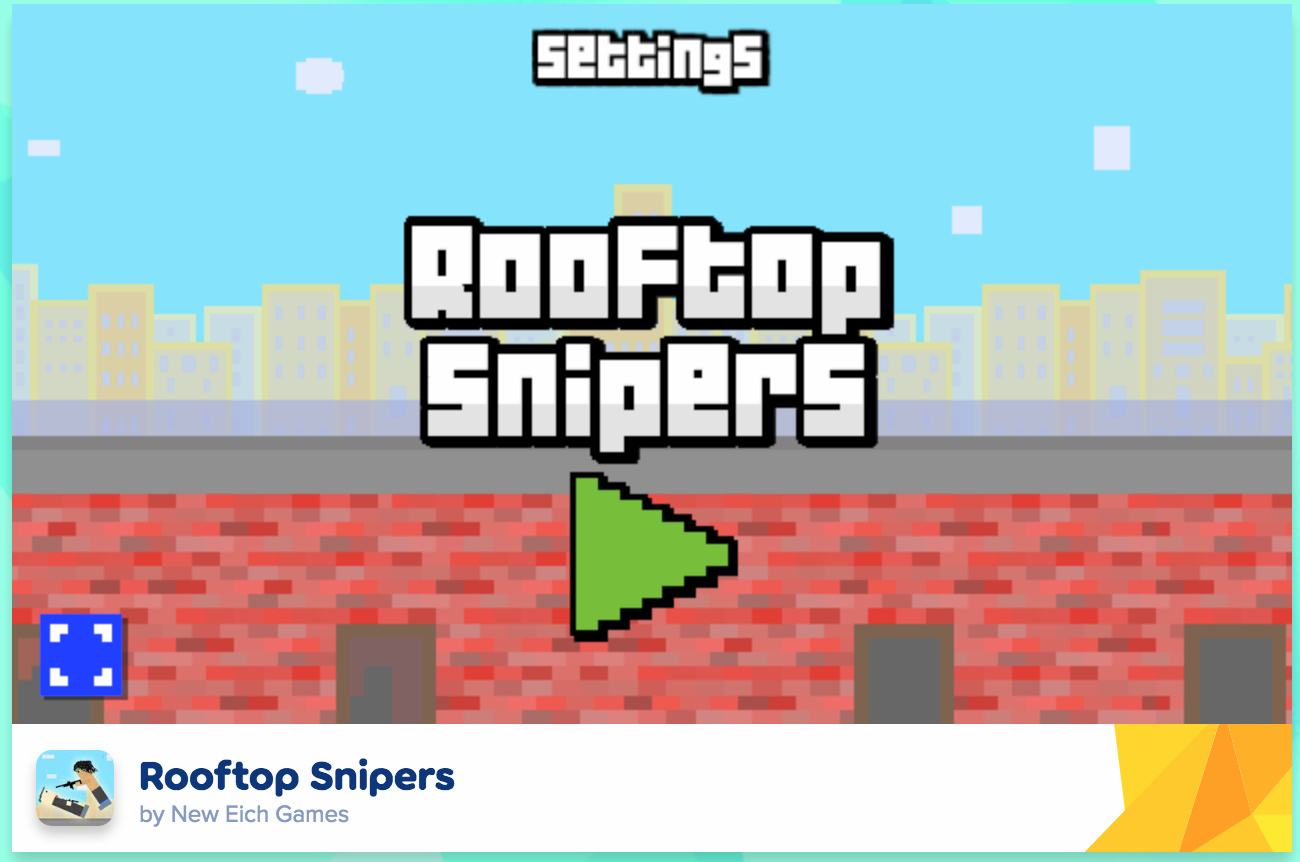 The controls here are similar to Getaway Shootout, too, in that players only have jumps at their disposal as well as a button to fire their rifle. Don’t worry about violence; the game’s blocky, cartoony aesthetic and ridiculous over-the-top action will put paid to any fears you might have about how violent it is. It’s a great laugh, it’s two-player, and it’s completely free to play right now from your browser.

If you’re looking for something a little more co-operative, then look no further than Fireboy and Watergirl 3. Don’t let the 3 put you off; you don’t need to have played any of the previous games in this series to enjoy the third instalment. This game sees players working together as the titular fiery and watery protagonists to overcome levels and escape the Ice Temple.

The catch is that the multiplayer is somewhat asymmetrical. Fireboy can’t touch water, and Watergirl needs to avoid lava. Using the two characters in tandem is the only way to achieve success, which is why this is an excellent game to play with your kids; it builds co-operative skills and problem-solving, as well as just being a great time as a game. There’s a whole series of these to get stuck into if you like it, as well.

This retro-inspired pixel art game pits players against the titular Temple of Boom, tasking them with slaying wave upon wave of increasingly numerous and difficult monsters. Each player is equipped with a default slow-firing pistol, which can be upgraded with numerous powerups laying around the arena including bazookas and other more powerful artillery.

If you’ve ever played Super Crate Box, or if you know of it, then this is a very similar prospect, but with multiplayer support. The game starts out pretty simple, but quickly becomes overwhelming, so coordination is key. Don’t expect to survive your first session; that’s part of the fun, and it’s guaranteed to increase your kids’ awareness and improve their motor skills. If that sounds dry, don’t worry; Temple of Boom is a super-cathartic, super-fun shooter to boot.

Browser-based games will probably never be able to provide a seriously authentic racing experience, but who really wants that, anyway? 3D Arena Racing is a great piece of throwaway fun. Its blocky voxel aesthetic, arcade-style controls and series of unlockable vehicles all go together to create the perfect Sunday afternoon entertainment for you and your kids. 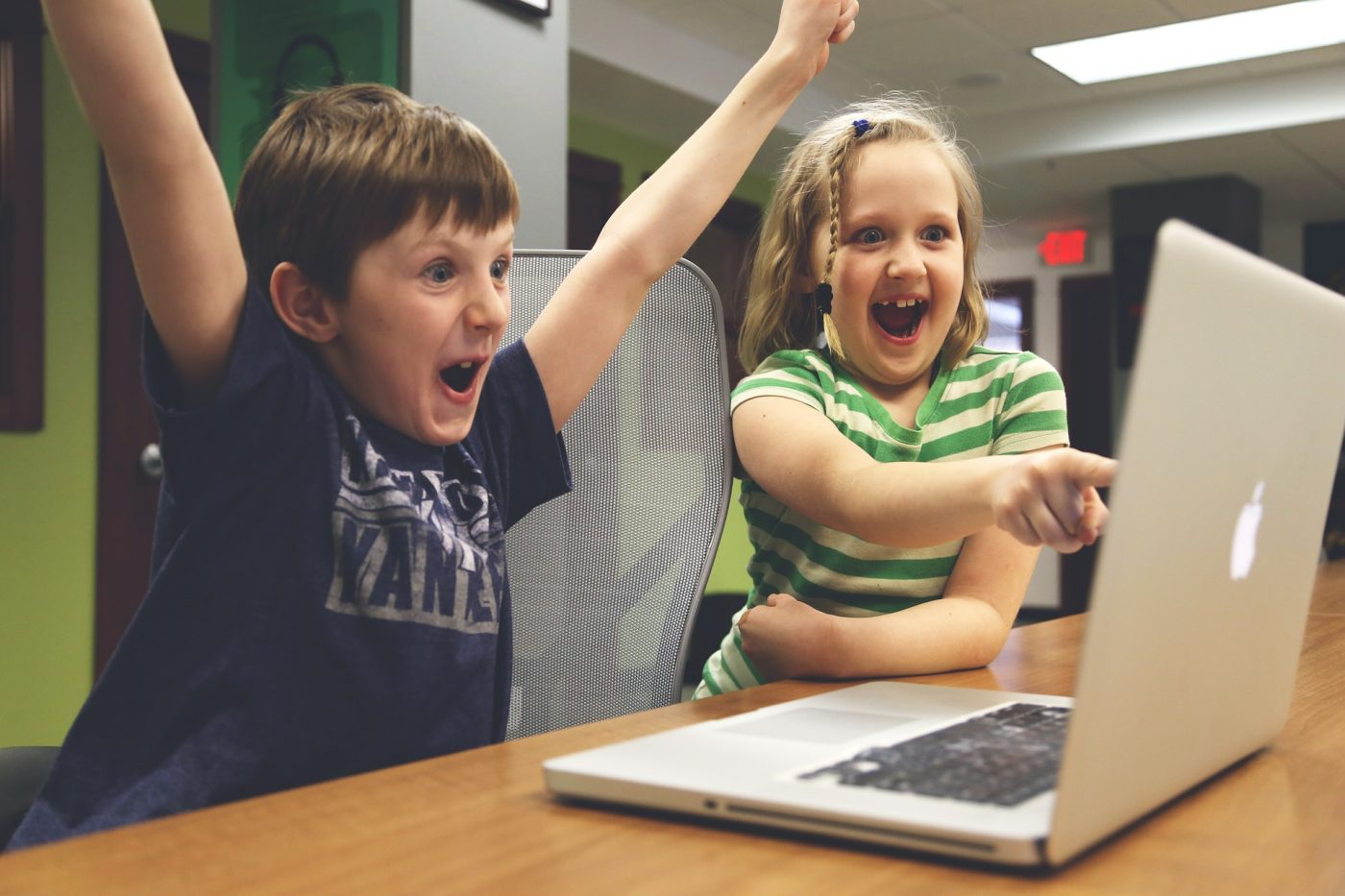 The controls are dead simple for this one; player one controls their car with the WASD keys, and player two uses the arrow keys. The object is to win races, gradually upgrade your car and stay ahead of the competition. 3D Arena Racing may not quite be able to compete with Gran Turismo and its ilk, but it’s completely free and it’s great fun, so it’s an excellent option as a multiplayer lark.

We know what you’re thinking: if only Getaway Shootout and Rooftop Snipers were ping-pong games. Well, your absurdly specific prayers have been answered thanks to Ping Pong Chaos. Coming to us yet again from the insanely talented folks at New Eich Games, Ping Pong Chaos is very aptly-named indeed. At its core is a fairly basic game of table tennis, but with New Eich’s characteristic personal touch, it very quickly becomes madness.

The controls are similar to New Eich’s other outings, in that each player has only two keys, both of which are jumps in different directions. The twist here is that there’s no violence or combat; instead, New Eich brings its signature insanity to a non-contact sport, so this one’s great for those of you who are a bit squeamish around blood.

Irrational Karate takes home the double-gold; it’s an interesting, ridiculous fighting game, and it also has a pretty excellent name. It’s sort of a take on old-school one-on-one fighters like Street Fighter, and its two central combatants will look suspiciously familiar to anyone who’s au fait with that venerable franchise.

Where Irrational Karate sets itself apart is in its controls and its visual style. It doesn’t look a million miles away from the half-cutscenes of Final Fantasy VII, with its super-deformed art style that makes the characters look like adorable chimps rather than human beings. Its controls, meanwhile, are reminiscent of its bigger siblings, but with a unique twist that makes them fun and challenging to learn.

Fancy a slow-paced multiplayer take on Pac-Man? If so, you’ve come to the right place. Bad Ice-Cream 3 is a more sedate, rebellious version of the aforementioned arcade classic, with a dollop of Bomberman thrown in for good measure. Although the game is competitive in that players compete for points, it’s also co-operative, as players don’t need to fight each other to progress through the stages.

Levels are presented as top-down affairs in which players must collect fruit while avoiding patrolling enemies. One hit means you’re done, so you’ll need to be careful. This one’s four-player, too, so if you’ve got more than one kid clamoring for a try, now’s the time to let them have their moment.

Finally, we have a game once again closely inspired by Bomberman, as well as classics like 1942 and (to some extent) Ikaruga. Tank Rumble sees players take control of a tank and roam around a massive open space attempting to take down their enemies. This one is purely competitive, so if you’re not looking to foster some rivalries between you and your kids, it’s probably best to look elsewhere. 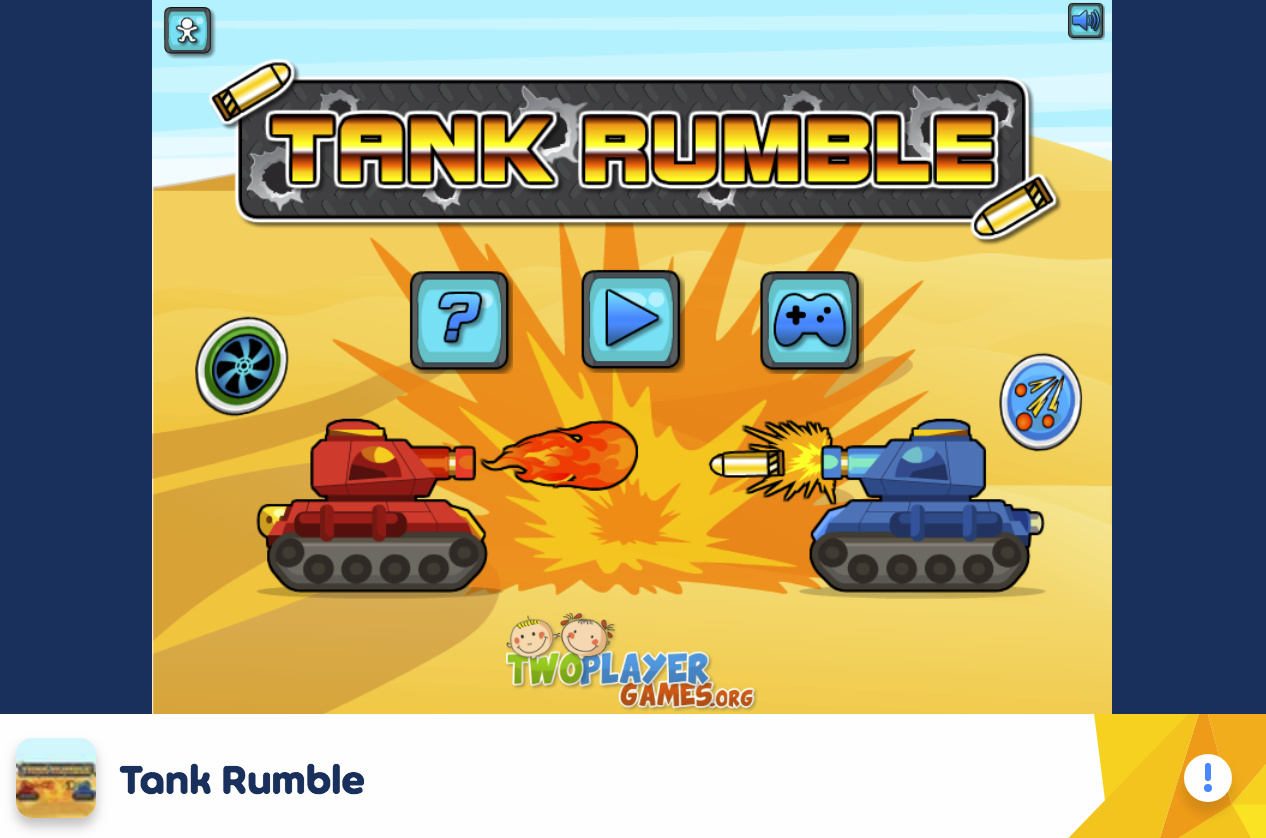 Those who do want a showdown with their little ones can expect a rollicking good time in Tank Rumble. The tanks’ weapons are cathartic and punchy, the movement is challenging to learn but fun to master, and the emergent nature of the stages on offer means that players will always have a unique story to tell after each fight. Tank Rumble is a great way to have fun with your kids – just don’t expect them to speak to you for a while after you win (or vice versa).