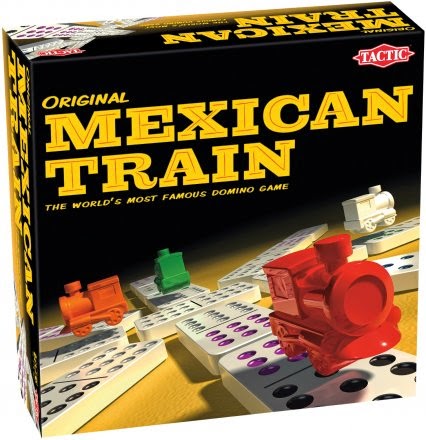 I was so excited to finally have the chance to play the Mexican Train game. My dad has talked about it for several years after having a co-worker introduce him to it. He loves this game and hadn’t been able to find the ‘right one’. He had wanted all of us to play this for a family-game-night, but I guess it just isn’t the same if you don’t have the original. Now, we have the original Mexican Train game and all is right with the world.

It’s been quite a while since I’ve played any sort of game that involved dominoes and Joey heard the word ‘train’, so he was in! The game is fun and a little addicting. It can also last for quite a while just depending on how things go. So, do prepare yourself for that!

The object of the game is to keep your train moving all the way to victory! Lay out a chain of dominoes (called trains) from the center domino piece, or add pieces to the group’s common chain (The Mexican Train). The first player to finish playing wins! There are many ways to block the trains along the way – so beware of obstacles!

We received the Mexican Train game for review. All opinions are our own.